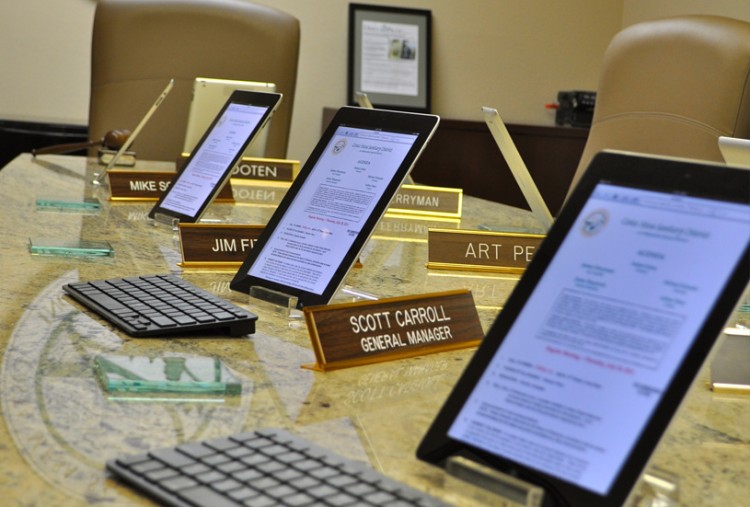 Cost Mesa Sanitary District uses Laserfiche as the core of their paperless initiative. Laserfiche is used by the district to securely store scanned documents such as plans and agendas. NovusAgenda, and a host of other Laserfiche Features, such as Weblink which allows the public posting of documents from the Laserfiche repository, further increase ROI and enhance organizational productivity.

The Costa Mesa Sanitary District (CMSD) Board of Directors meets once a month on the fourth Thursday of every month. In addition, the Board established two committees, the Sewer System Committee and the Recycling Committee, in which two board members are appointed to serve. The committees also meet once a month and they are subject to follow the requirements under the Brown Act. Having three monthly meetings that require agendas, staff reports and back up documentation became increasingly costly and time consuming to prepare, as each agenda packet can average 166 pages. Sometimes, the Board agenda packets fall at over 300 pages! CMSD estimated that it was spending 240 staff hours, printing 40,000 pages and spending over $13,000 a year to prepare and disseminate agenda packets.

In 2010, the Board of Directors adopted a five year Strategic Plan in which one of the goals of the plan was to encourage implementing zero waste programs and promote sustainability efforts. Using the latest technology, CMSD was able to achieve this Strategic Plan Goal while at the same time reducing costs and improving efficiencies for preparing and disseminating agenda packets by implementing a Paperless Agendas Program.

CMSD’s Paperless Agendas Program is quite simple and can be implemented by any organization at a minimal cost. For our program, CMSD decided to use the latest technology by procuring iPad 2s from Apple. Other accessories included iPad stands, cordless key pads (for the Clerk of the Board and General Manager), an iPad safe and a wireless access point. The cost to purchasing these items was a total of nearly $8,000.

When an agenda packet is complete instead of printing several copies (on the average, CMSD was printing 18 agendas per meeting) the agenda is scanned on a copy machine in a .pdf format and then uploaded on the home page of CMSD’s website. After the agenda packet is uploaded, an email is sent to the Board of Director’s and staff informing everyone that the agenda is now available and ready to be downloaded onto their work or home computer. This method has saved the district approximately $744 a year in mailing costs.

Before a Board and/or committee meeting begins, the iPads are set up in front of Board members’ and staff’s designated chairs. The wireless access point in the Board room allows staff to access the internet on the iPads and download the agendas from CMSD’s website. This procedure improves access to the agenda because many agenda packets are larger than 10 MB and many computer servers will not accept documents larger than 10 MB for security protection reasons, such as viruses. The wireless access point also allows staff to email meeting notes from the iPads to their work computers. There is virtually no paper required during meetings.

When the meeting is over, the iPads are stored in a safe that is specifically designed to store iPads. The safe can hold up to 20 iPads and inside are 20 outlets so that the iPads are continually charging through a single electrical cord that is routed from the safe and connected to a wall outlet. The iPads are not allowed for personal use and no one can take the iPads home.

The results of the program have proven successful in a short matter of time with a return on our investment within the first year. The total cost to procure the necessary equipment and supplies for a Paperless Agendas Program was close to $8,000. It is estimated that CMSD will save 213 staff hours in preparing agendas. These saved hours have been reassigned to other projects and/or programs that have, in the past, received less attention because of insufficient resources. In addition, less paper is being printed. CMSD estimates that it will print little more than 8,000 pages a year on agendas (at least one hard copy is made available for the public), saving 32,000 pages a year. The benefits to the environment for saving this amount of paper are staggering. Within six years, the scheduled replacement for the iPads, CMSD will have saved one ton of paper, which will result in the following environmental benefits:

The net savings CMSD is experiencing from this program is $10,691 a year, which is an immediate return on our investment. When the iPads are replaced in six years, CMSD will have a net savings of $64,146.

The success of CMSD’s Paperless Agendas Program has attracted the attention of many special districts in California and even one organization as far away as Minnesota because of the relative inexpensive and ease to implementing such a program. Thanks to the Board of Directors commitment to bringing new innovative ideas to fruition, CMSD’s Paperless Agendas Program is a proven success story.