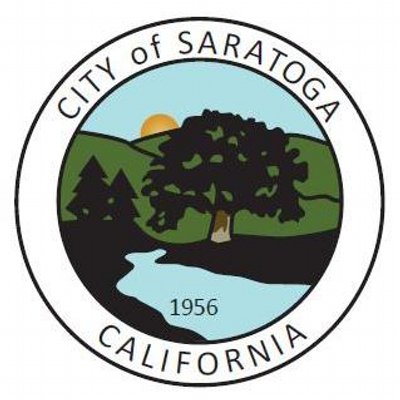 December 4, 2018 in Customer Spotlights |
No Comments

The City of Saratoga, with a population of around 30,000 residents, is an attractive residential community with a small-town vibe located in the San Francisco Bay Area. Known for its high quality of life, excellent schools and distinctive businesses, Saratoga has a vibrant art scene and a wealth of activities available to residents and visitors.

ECS installed a Laserfiche system at the City in 2003 with just 2 users. The system has since grown to 48 users and is being used in 5 City departments. The City chose ECS and Laserfiche due to the wealth of experience with other city and county governments, an intuitive interface, and the ability to automate manual processes.

The ability to automate manual processes is what prompted the City to want to develop an electronic routing approval process for vendor contracts management using Laserfiche Forms and Workflow.

Managing contracts at the City was a paper-based, manual process which could take up to 3 – 4 weeks, and in some cases two months, to complete and get final approval. Another issue with a manual paper process is that contracts could get lost. The City already had a paper routing form that accompanied all contracts as they went through the approval process. The form was a check-off list for the Department Director, City Attorney, and Administrative Services Director to ensure all steps were completed before approving. Insurance Requirements were also part of the check-off form.

The City Clerk’s Office spent several months designing what they really wanted the information on the form to look like and worked with each approver to determine what they needed to have to make their approval. The City then turned to ECS Imaging to create the Form and the Process. 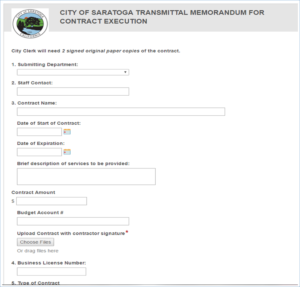 The Form includes drop down menus with multiple selections depending on the type of contract, required fields that have to be completed, and upload fields in which submitters can upload additional documents such as the contract, bonds, insurance documents, etc. The form also includes a notes field in which approvers can write notes when they approve or deny. Lastly, the form includes the check-off list that originally accompanied paper contracts so that each department can check-off what they require for contract approval.

As the Form moves to each person, an email is sent to that staff letting them know they need to approve the Form and contract. The tricky part is after the Department Director approves, they wanted the City Attorney, Risk Manager, and Finance Manager to be able to approve at the same time. the real time savings really comes in with having all 3 approve at the same time. If any of the three approvers in the Parallel Review deny the contract, it goes back to the submitter to start over. Or they can select Partial Approval and write a note with changes needed.

Now that the contracts are routed and approved through Forms and Workflow, contracts do not get lost, which has equated to significant cost savings, the approval process only takes a week to complete, and submitters can replace documents attached to the Form. The contracts and attachments are uploaded to Laserfiche. Although the contracts still need wet signatures and items in Forms cannot be replaced until all approvers have seen it, the process has improved dramatically.

The City plans to continue automating process with Forms and Workflow such as Human Resources Onboarding and Public Information Requests.

“My experience with Laserfiche and ECS Imaging has been excellent. The ECS quarterly user groups are very helpful for training and discussing Laserfiche Use Cases”, said Debbie Bretschneider, Interim City Clerk.

Bretschneider adds, “Settle for little wins at the beginning of the Laserfiche implementation before taking on a significant project.  The little wins will get buy in from other departments and they will start to understand the value of Laserfiche instead of thinking this is just another database that I will have to learn.”