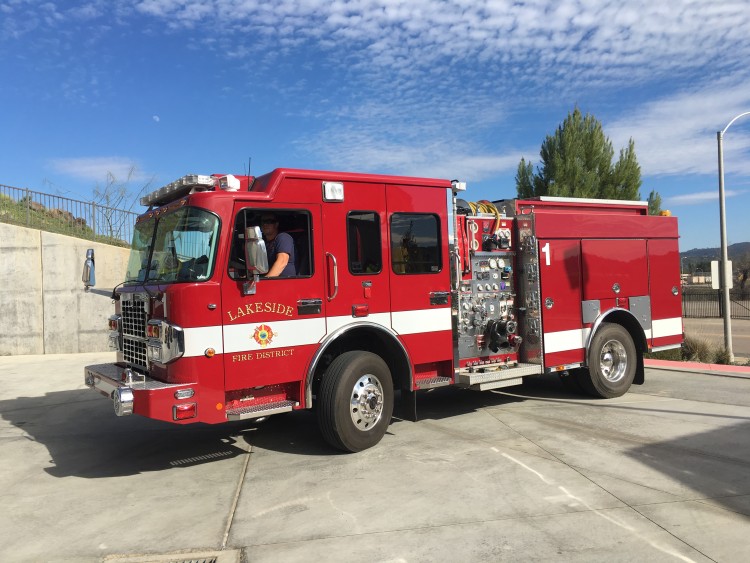 February 23, 2016 in Customer Spotlights |
No Comments

The Lakeside Fire Protection District in San Diego County is home to over 60,000 residents living in the communities of Lakeside, Eucalyptus Hills, Moreno, Winter Gardens, Lakeview, Johnstown, Blossom Valley, Flinn Springs, Pepper Dr. and other areas of unincorporated El Cajon. They service an area of 45 square miles which is primarily suburban residential but also has several core commercial zones, some light industry, and many rural/agricultural properties. The district also has a significant wildland/urban interface.

With a staff of 56, Lakeside FPD operates four fire stations and manages a fleet of fire apparatus, ambulances, and other fire prevention tools while responding to over 8,000 calls per year. Fire crews and staff also spend hundreds of hours training, maintaining, practicing, teaching, and assisting in numerous other venues and non-emergency duties. These activities have generated an excessive amount of paperwork that has been accumulating in filing rooms and an off-site storage location.

With documents spread across many locations Lakeside FPD needed a solution that would provide an easy way for them to search for archived information as well as accurately and efficiently dispose of records they no longer needed.

The solution came when Lakeside staff attended an ECS Imaging User Group where they were introduced to Laserfiche and had the opportunity to talk to other Laserfiche users. They were convinced that Laserfiche would be the solution they were looking for. In January 2014, ECS installed a Laserfiche Avante system and in 2016 installed Forms and Forms Portal which allows for submission of fillable web-based eforms, and Weblink Starter Public Portal providing Read-only access to Laserfiche via a web browser.

To manage the retention schedule of so many records, Lakeside FPD had ECS developed a workflow that automatically assigns a retention period to a document when it is scanned in. Another workflow monitors the retention information of each document and when a document reaches its retention date it is automatically moved to a pending deletion folder. A list of pending documents is then sent to the Director for approval to purge those documents from the system.

Since implementing Laserfiche, Lakeside FPD has seen significant savings. Due to the efforts of Ashleigh Copenhaver, Office Technician for Lakeside FPD, who took the time to scan in old records while disposing of the hard copies, the District has completely eliminated the need for off-site document storage. “Because of this project, I have gone through and shredded a lot of old records that were well past retention that we did not need to keep or scan”, said Ashleigh. “We had about 140 boxes at the off-site storage, plus 2 file rooms that were wall to wall filing cabinets”, she added.

As of July 2015, almost 60 boxes of files have been scanned into Laserfiche (along with day forward documents since implementing the system), while the rest of the boxes await approval to be shredded because they are already well past their retention dates. Since converting their paper documents into digital files the District has been able to reclaim use of the two filing rooms and sell over 15 filing cabinets. They have also seen a huge reduction in staff time spent searching for, retrieving, and managing records.

Lakeside FPD is still in the process of implementing their current plans with Laserfiche, which include expanding usage of the system company-wide, incorporating the use of eForms, and using Laserfiche for all working documents. The approach they have taken is to work out as much as possible before implementing it.

The project could not have gone as well without the help and guidance of ECS Imaging. “Everyone at ECS has been amazing from our account rep to all the tech support. Every time I have an issue and call ECS they are wonderful in helping me solve my issue”, she said.

"They have been there every step of the way, from a little thing to the most recent upgrade to the...

"I've been with ECS at different cities and everybody there has always been so helpful. And I get excited when...

"From an IT perspective its been great especially with the support, knowing the back end of getting Laserfiche up and...

"ECS Imaging has been fantastic. Anytime I've needed help I've been able to get help right away." -Michael Dunn